On August 31, 2021, Ameriwest announced the initiation of a deep target geophysical study designed to determine the presence and depth of conductive and potentially lithium brine-bearing strata. The survey program was undertaken in Q3 2021 by Zonge International Inc. (http://zonge.com) and consisted of a Magnetotelluric (MT) survey. Data was collected along two lines oriented at N90˚E for a total of 12.0-line kilometers. Electric field measurements were made continuously along the lines. Magnetic field measurements were recorded approximately every 1600 meters along each profile. From these measurements a total of 60 magnetotelluric soundings were obtained. See figure 1. 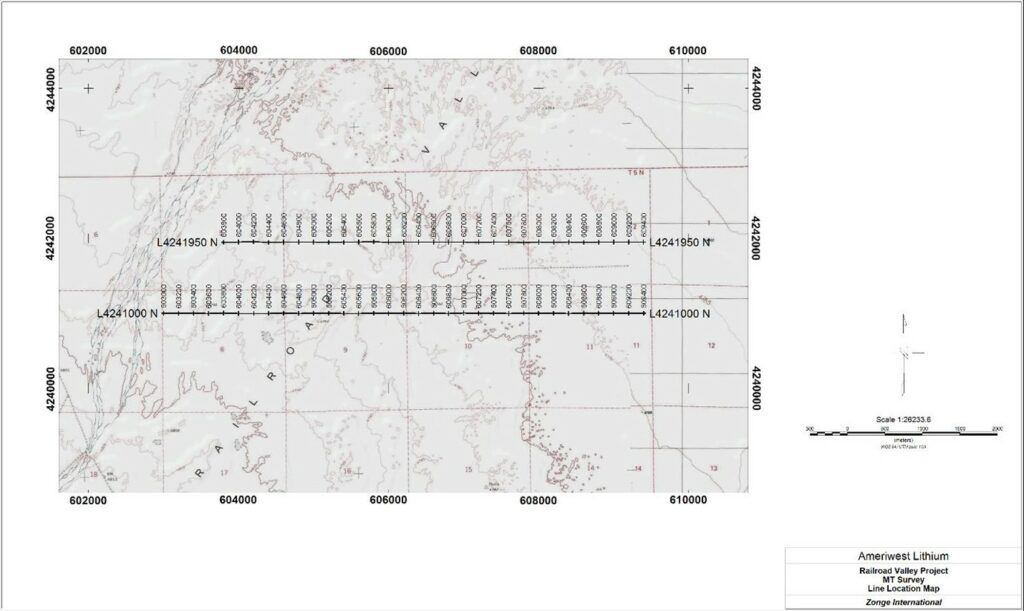 As noted in Ameriwest’s news release of April 19, 2021, the Company originally staked 312 unpatented placer claims, totalling 6,240 acres at the Railroad Lithium Property located 100 miles northeast of Tonopah. Upon receipt and analysis of the geophysics data whereby sharp resistivity boundaries in the subsurface are represented as resistivity gradient zones, Ameriwest noted increased resistivity open to eastern portion of the study. (See Figure 2). Therefore, the Company elected to acquire an additional 150 placer claims on the eastern portion of the existing claim block. The additional claims now increase the Railroad Property from 312 to 462 placer claims and increase the property size from 6,240 to 9,097 acres in total.

Railroad Valley was originally identified by the US Geological Survey (USGS) as having potential to host lithium bearing brines in its subterranean aquifers beneath the valley floor. The Valley fits the current geological model and understanding of lithium brine deposit occurrences, (as defined by USGS Open File 2013-1006), and is considered analogous to the highly productive Clayton Valley. While Railroad Valley offers certain geological similarities to Clayton Valley, it differs in that it represents a new and virtually unexplored target, with only a handful of companies present, unlike Clayton Valley’s numerous leases and complex water issues. Based on seismic surveys, the Valley is about three times the size of Clayton Valley.

David Watkinson, Ameriwest’s President & CEO, notes, “The results from our geophysics study were extremely compelling. So much so, that we felt that procuring additional leases was of paramount importance. As noted previously, this is one of Nevada’s largest trapped drainage basins and has geologic potential to host large lithium brine deposits. Given its comparative attributes to Clayton Valley and it’s potentially much greater size, the initial results from our study are a very optimistic first step for Ameriwest’s lithium exploration in the southern portion of the Railroad Valley basin.”

Greg Bell, P.E. (Arizona), a qualified person under the NI 43-101 instrument, has reviewed and approved the technical content of this release.

Ameriwest invites interested stakeholders and shareholders alike to contact our investor relations team or visit our website and sign-up for regular news alerts which will help provide timely updates of ongoing activities. Company management believes strongly in regular communications, updates, and reports from the field as an important aspect of developing informative and useful engagement as the Company continues to help explore and develop the exciting and rapidly evolving lithium sector.

On Behalf of the Board of Directors,

The Canadian Securities Exchange has not in any way passed upon the merits of the matters referenced herein and has neither approved nor disapproved the contents of this news release.

Vancouver, BC – September 23, 2022: Ameriwest Lithium Inc. (the “Company” or “Ameriwest”) (CSE: AWLI) is pleased to announce the completion of the Company’s plan

Vancouver, BC – September 15, 2022: Ameriwest Lithium Inc. (the “Company” or “Ameriwest”) (CSE: AWLI) is pleased to announce that, in connection with Company’s previously