The Company believes its RRV Property, located 48 miles south of Ely, Nevada, has potential to host a large lithium brine deposit based on geophysical studies done on the property to date.  Ameriwest’s CEO, Mr. David Watkinson, commented “We are extremely excited to have discovered a large gravity low with potential to host a substantial lithium brine deposit during our recent RRV geophysical programs, and we have now expanded our claims to encompass the entire gravity low.”

As announced by press release on January 7, 2022, Ameriwest retained Tom Carpenter, consulting geophysicist, to conduct a gravity study of its RRV claims.  Field work was completed from January 7 through January 16, 2022.  Preliminary results from this gravity survey indicate a large gravity low on Ameriwest’s claim block, extending to the north onto the ABTC claims.  With the acquisition of ABTC’s claims, Ameriwest believes it has effectively encompassed this large gravity low anomaly within its expanded claim block.  The gravity low is interpreted to be a large depression filled with sediments, which is part of a closed valley that has potential to host a large lithium brine deposit. (See Figure 2 Bouguer gravity map.) 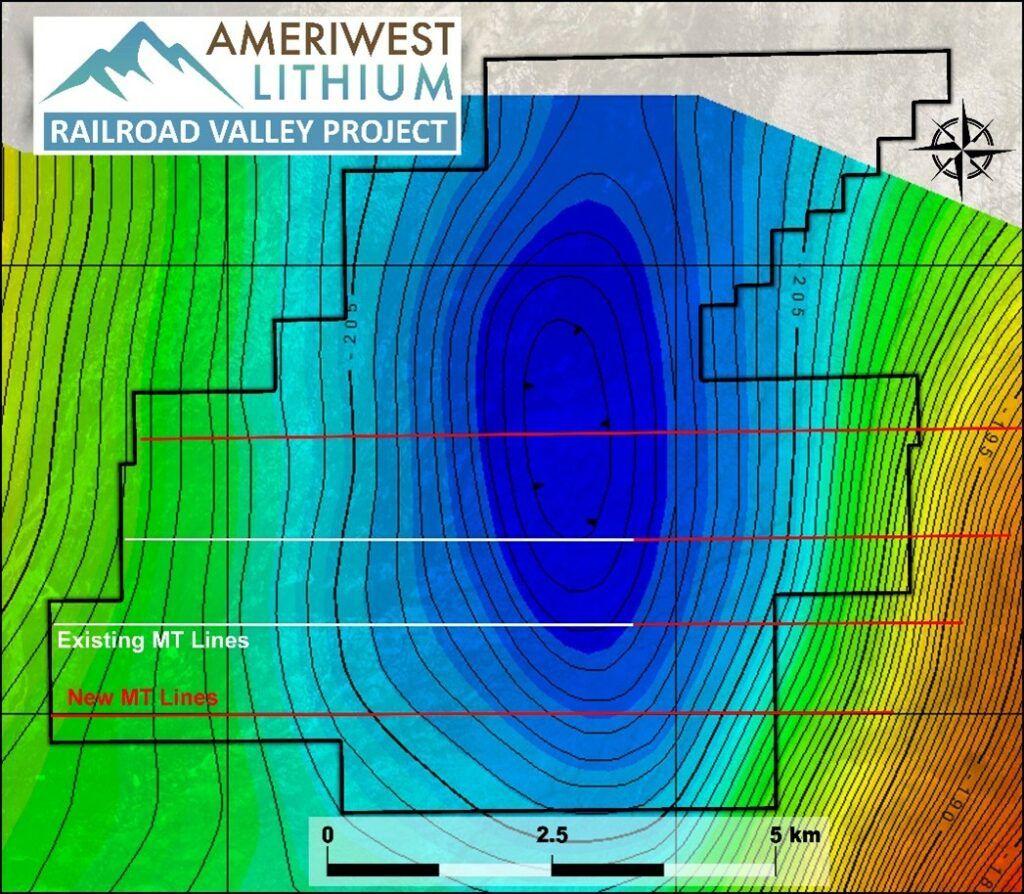 Also announced on January 7, 2022, Ameriwest announced it had contracted Zonge International Inc. to conduct further Magnetotelluric (“MT”) geophysical studies on the RRV Property.  Zonge has now completed field work to extend two previously completed MT lines and add two additional MT lines, all  of which are located over the southern half of the gravity low.  Results from this additional MT work are pending.  Ameriwest now plans to add two additional MT lines to the north, bringing the total number of MT lines to six.  The two new lines will be located over the northern half of the gravity low and on the claims acquired from ABTC.  The six MT lines, once completed and processed, should characterize the location of the potential brine target within the gravity low.  Note that results from the original two MT lines done by Zonge, outlined in an October 27, 2021 press release, identified a large resistivity low on the RRV Property, representing a potential lithium brine target.

Railroad Valley is structurally controlled by an active tectonic setting. This resulted in volcanic activity on the northwest and west margins of the valley, including several volcanic calderas. Fault zones have created conduits that allowed geothermal fluids to rise to the surface to form numerous hot springs.  Ameriwest believes these hot springs contain elevated levels of lithium and over the millennia enriched the lacustrine sediments of Railroad Valley.

Based on the outcome of the combined geophysical studies (gravity, MT, and seismic), Ameriwest will move forward with testing of brine samples at depth within the gravity anomaly. Ameriwest will conduct a comprehensive study aimed at assessing the lithium potential of the Railroad property with the view of drilling the initial targets later this year subject to permitting.

Under the terms of the Purchase Agreement, Ameriwest paid ABTC an aggregate purchase price of USD$175,000 (the “Purchase Price”) comprising of USD$125,000 cash and USD$50,000 in common shares (67,564 shares) of the Company (the “Consideration Shares”) at $0.94 per Consideration Share. The transaction may be subject to regulatory approval.

Ameriwest invites interested stakeholders and shareholders alike to contact our investor relations team or visit our website and sign-up for regular news alerts which will help provide timely updates of ongoing activities. Company management believes strongly in regular communications, updates, and reports from the field as an important aspect of developing informative and useful engagement as the Company continues to help explore and develop the exciting and rapidly evolving lithium sector.

On Behalf of the Board of Directors,

Ameriwest Lithium Inc. is a Canadian-based exploration company with a focus on identifying strategic lithium mineral resource projects for exploration and development. The Company is currently focused on exploring its 13,580-acre Railroad Valley property, the 16,940-acre Edwards Creek Valley, and the 5,600-acre Deer Musk East property in Nevada.  In addition, the Company is exploring the 2,860-acre Thompson Creek Valley property in Arizona.

The Canadian Securities Exchange has not in any way passed upon the merits of the matters referenced herein and has neither approved nor disapproved the contents of this news release.

Vancouver, BC – September 23, 2022: Ameriwest Lithium Inc. (the “Company” or “Ameriwest”) (CSE: AWLI) is pleased to announce the completion of the Company’s plan

Vancouver, BC – September 15, 2022: Ameriwest Lithium Inc. (the “Company” or “Ameriwest”) (CSE: AWLI) is pleased to announce that, in connection with Company’s previously